Musiara – a tiny calf was first observed by a film crew on the plains of the Maasai Mara was founded laying down under the shade of a tree, vulnerable and alone, emaciated and totally dehydrated. The Maasai Mara warden responded and drove to the site to be sure the baby was an orphan and in need of a rescue, but on arrival the calf was unresponsive, with only a faint heart beat evident of any life. The rescue was mobilized and the DSWT team flown in to the closest strip and the calf was delivered to the team in the back of the Mara Warden’s landcruiser.

Thanks to the intravenous hydration he was receiving he began to stir, and after a few hours was able to be aided to his feet and fed diluted milk. Musiara was just 6 weeks old on arrival as he had only one little tooth popping through his gums. With the constant presence of a loving Keeper, and the patient nurturing daily routine, of dust baths, hydration and milk feeds he grew stronger. He is a lovely character-full little chap, with a strong will to live, which in such precarious circumstances can very often be the difference between life and death.

“We adopted Musiara with the hope to bring such a strong and lovely calf into our beautiful life. We really appreciate the job of all Keepers in The David Sheldrick Wildlife Trust; hence, we want to contribute our resources to remain the meaningful activities as well as to keep upcoming generations safe”, said Mr. Terry Tan – Director of Leong Lee International 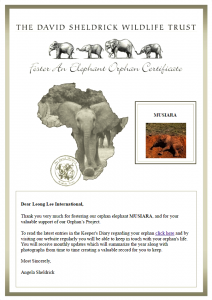 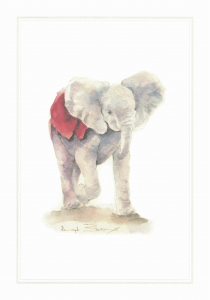 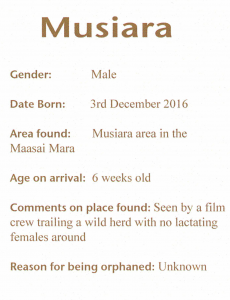